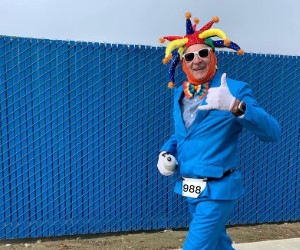 The Jester is an iconic race fixture in the Southern California running community. He’s hard to miss since he’s the only runner on the course dressed as a court Jester. He’s also hard to miss because he’s typically the last runner on the course. For nearly 11 years the Jester has made a habit of finishing his race and then waiting at the finish line to cheer every single runner and every single walker until the very last one comes home.

The Jester grew up feeling like a misfit, an oddball, and an outcast, and has made it his mission to bring a little merriment to as many people as he can on the course, doing his part to make sure that no one in his race feels like the misfit, the oddball or the outcast.

The Jester wasn’t born the Jester, he wasn’t even born EdWiN William Ettinghausen. Born and raised just a stone’s throw from the Pony Express Trail, in Placerville, California, his birth name was Edwin Marion Richardson, Jr. Abandoned as a baby, he grew up in various foster homes and was adopted by his foster parents at the age of 12.

As a young boy, he spent endless hours daydreaming about becoming a world-renowned runner in the 1984 Summer Olympic marathon in Los Angeles, or running the newly formed Western States 100 that passed just miles from his home.

By the time he was 18, he had run across five marathon finish lines in and around the San Francisco Bay Area, along with many local 5k and 10k races. And then life happened. The running shoes were traded in for work boots. Becoming a world-class athlete was a day-dream for care-free children, certainly not a reasonable goal for a responsible grown-up adult with young mouths to feed.

From time to time over the years, he dusted off his running shoes and ran local 5k and 10k races with his four children. In March of 2000, he walked all 26.2 miles of the Los Angeles Marathon with his 9-year old son Ethan and 8-year old daughter Andrea, while 11-year old Amanda ran ahead. And then the running shoes went back on the shelf, collecting dust . . . for eight long years.

In his mid-40s he experienced a severe mental health crisis and turned to his trusted old friend for therapy - running. In March of 2009, he started running marathons again and ran his first 100-mile race that May. In the summer of 2010, he raced in a Jester hat for the first time, and since then has been The Running Jester in nearly 200 marathons and over 180 races of 100-miles or longer.

The Jester never did attain that worldwide running fame he so longed for as a child, but he did set many American and World running records, some of which still stand, and some of which have been surpassed, including the world records for the most marathons/ultra-marathons completed in one year - 135 (concluding with BADWATER 135 in July 2011 - July 6-8 will be his 10th consecutive Badwater 135), and most 100-mile races completed in one year - 41.

Now that you know WHO the Jester is, WHY would you Chase him around California?

The Jester is a success mentor who has coached many people to fulfill their extreme dream, including their first marathon or their first 100-mile race. He believes that everyone is capable of completing a marathon, and at least 95 percent of healthy adults are capable of completing a 100-mile race. In fact, every single one of his coaching clients that shows up to the start line, always crosses the finish line. Why? Because completing any goal, including a marathon, or a 100-mile race, takes jest one step at the start, and then another, and then another, and then . . .
The finish line!

The purpose of Chase the Jester Around California is to help give you a goal for walking or for running that suits your fitness level, while providing a social media community to support you. And to hold you accountable to your own goals! Whether you’re hoping to start a simple walking habit of one-mile-a-day from May 25 to the end of the year, or you’re a seasoned runner that can run a 10k-a-day for 220 days -or someone in between- we have an event for you. We’ll give you the support and virtual hugs you need all along the way. As well as some fun one-of-a-kind bling when you finish!