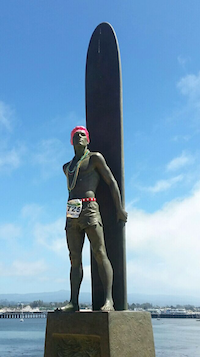 Do you want to race in the same wave as your sister, son, daughter, cousin, boyfriend/girlfriend, spouse or friend without having to start in a competitive age group wave? If so then this is for you. It's the sprint race with it's own wave start. You'll get all the same race goodies but you won't be eligible for age group prizes.

There are two Duathlon distances for 2021, both with an initial 5K Run, followed by either the sprint or Olympic distance bike ride, and wrapping up with another 5K Run. The first 5K run will start on the beach at the same place as the swim, proceed up West Cliff Drive to the 5K turnaround and return to Depot Park  to Transition for the bike ride. Both distances will finish with another 5K run on West Cliff to the finish. This is the same run course as the Sprint Triathlon Course. Total run distances for both courses is 10K, split into two runs of 5K each. The International Distance Duathlon is 5k run - 24 mile bike and 5k run.  The Sprint Plus Duathlon is 5k run - 12 mile bike - 5k run.

Everyone gets into the fun at Tri Santa Cruz - event eh famous Surfer Dude gets all decked out in race gear to cheer you on your ride and run!

If you continue to use this site, you consent to use all cookies.